Mayor Anthony Housefather and all eight incumbent city councillors have announced their intention to seek re-election in the next Cote Saint-Luc municipal election, which will take place on November 3, 2013.


“Our council works hard as a team with integrity and transparency.  We began this mandate with significant goals and we have achieved them,” said Mayor Anthony Housefather.”

“We built an Aquatic and Community Centre that is the pride of the city. We created a dramatic society that has enhanced our cultural offerings.  We have created an urban agriculture program to improve health and we have continued to improve our infrastructure by revamping parks and playgrounds, rehabilitating streets, pipes and facilities,” the Mayor said.  “We have overseen the successful Cavendish Mall redevelopment, a number of townhouse projects and the continued rejuvenation of our community.  We were instrumental in convincing the English Montreal School Board to reintroduce a mainstream English high school in Cote Saint-Luc and have worked hard to support our excellent public and private schools and institutions.”

“We have continued to run the city as we would a business, with tight budgetary control keeping our shareholders - our residents - always in mind,” Mayor Housefather said. “I am very pleased that we have achieved these goals together, and I have full confidence that our council can do even more together in the future.” 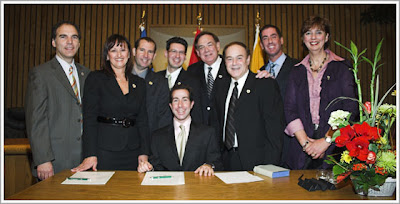 “It is great to have a Mayor who can get both lead and listen to his council, stated Councillors Mike Cohen and Dida Berku.  “We compare Côte Saint-Luc to other municipalities and see how much our councillors are empowered to act and how constructively decisions are made and that results from Mayor Housefather’s leadership.”

“Anthony worked with us to lead the demerger movement,” said Councillors Ruth Kovac, Glenn J. Nashen and Mitchell Brownstein.  “His leadership in allowing us to break away from Montreal has clearly proven to be the correct decision and he has shown that a city can be run in an ethical, honest and positive way. We are delighted to endorse him.”

“There is no mayor we know who works harder than Anthony Housefather,” stated Councillors Steven Erdelyi, Sam Goldbloom and Allan J. Levine.  “He is available 24∕ 7 by email and phone and gets things done smoothly and constructively.  He has both intelligence and vision.”

While each member of council will run their re-election campaigns independently, the mayor has announced support for each of his incumbent colleagues.

“Sam Goldbloom (District 1) has been with us for two mandates now and has worked diligently on matters related to seniors, traffic and the library in particular,” said the mayor. “Sam has been an active member of both our Côte Saint-Luc Dramatic Society and Cats Committee. Before joining our council, Sam was integrally involved in many community organizations and that experience has served us well.”

The mayor noted that Mike Cohen (District 2) joined council eight years ago having worn many hats as a journalist and communications professional. “Mike has lived in Côte Saint-Luc most of his life and came to us having always been involved in our programs and activities,” he said. “We have benefitted from his expertise by ensuring the delivery of a well oiled communications plan for our citizens, from an enhanced website to various publications. His creation of District Information Meetings have been well received and caught on with other councillors.  In addition, his decision to establish the Côte Saint-Luc Cats Committee has helped our city play a leading role in the area of animal welfare.”

“Dida Berku (District 3), emphasizes the mayor, has done a masterful job overseeing the city’s finance portfolio while also working diligently on matters related to the environment and the Cavendish Mall development and Meadowbrook. She also played a critical role in the introduction of a code of ethics in the city. “Dida’s legal and financial acumen and her incredible work ethic are invaluable for the city,” said the mayor.

Steven Erdelyi (District 4), the mayor notes, has devoted an enormous amount of time and energy to the public works dossier and environmental matters in particular. “As a former high school science teacher and now a school principal, Steven is very detailed in everything he does,” said the mayor. “I know that when I give Steven an assignment, he will come back with even more meat on the bone than I expected.”

Allan J. Levine (District 5), a retired school teacher , has devoted much of his time and energy over the years to serving on the Planning Advisory and Audit Committees while being involved in all aspects of city life.  “In this last mandate of ours, Allan  has been able to marry his love for tennis with his duties as a councillor. “Allan has taken great pride in chairing our tennis committee,” the mayor said. “From the Côte Saint-Luc Tennis Club, to the reconstruction of the Wagar courts and the plans to refurbish those at Rembrandt Park, Allan’s love for tennis and ability to convince the council to move forward has made Côte Saint-Luc a tennis capital.”

Glenn J. Nashen (District 6) continues to be a great advocate for public safety, always looking for new ways to make Côte Saint-Luc an even safer place in which to live. “Glenn has been a volunteer with our Emergency Medical Services organization for many years,” the  mayor said. “He continues to oversee that dossier, in addition to our Public Security, Emergency Preparedness and the Volunteer Citizens on Patrol - an extraordinary service which was his idea. Glenn is constantly in touch with our local Police and Fire Departments, ensuring that matters of public safety are in good hands.” Nashen also heads up the Traffic Committee and CSL Cycles program, and he is always looking at new ideas to calm traffic, increase pedestrian safety and expand our cycling network.

Mitchell Brownstein (District 7) has been instrumental in the growth of Aquatic and Community Centre programs. “Mitchell has a long history in regard to swimming in our community dating back to his role as manager of the old Blossom Pool,” said the mayor. “The evolution of our ACC was a dream of his as well as mine, so I spend a lot of time with him and our aquatic staff overseeing the growth of aquatics in Côte Saint-Luc. His ideas such as the Fun Card and the Dramatic Society have been highlights of our last two mandates. The Recreation dossier which he oversees is multifaceted and time consuming.”

Ruth Kovac (District 8) has the very important dossier of urban planning and co-chaired the construction duties of the ACC. “Not on  ly did Ruth play a critical role in regard to the ACC,” said the mayor, “She also worked incredibly hard on the Cavendish Mall redevelopment. In addition, she chairs our Planning Advisory Committee, which oversees every new building permit request the city must deal with.  We are also grateful to Ruth for the long hours she spends overseeing financial expenditures in the city, working on the Audit as well as the Emergency Preparedness Committees.”

In conclusion the mayor stated: “This has been an excellent council and a superb mandate during these last four years. Our group of nine has in fact been together since we demerged from Montreal. We have been an effective and business-oriented team overseeing the city. I have always believed in empowering each member of council and I am very pleased with the success that has come with my decision to assign portfolios to each councillor. We have accomplished everything that was promised and more. I would be proud to continue to serve with each one of these dedicated civic leaders.”

Posted by CSL Cats Committee at 07:56